Crécy: The Age of the Archer 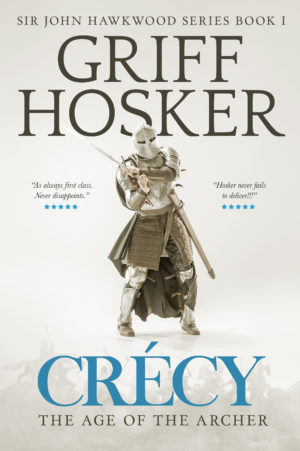 A hero’s journey begins in an exhilarating new series by Griff Hosker.

In 1335 the Black Death was just thirteen years away from England but there were other threats and dangers. Young John Hawkwood is forced to leave his home and seek a life in London. There he learns how to survive and, more importantly, how to fight. Leaving his life as an apprentice tailor he follows the army and King Edward to fight the Scots. He has a skill; he can not only use a bow, but he can use a sword and his mind. It is the start of a life of war for the young man.

He fights first in the Low Countries at the battle of Cadzand before heading to Gascony to fight under the charismatic leader and cousin of the King, Lord Henry Plantagenet. As he fights so his skills improve and the novel follows his progress until he fights in the two great battles of 1346, Crécy and Neville’s Cross.

This is just the start for John Hawkwood who will become, in the fullness of time, one of the greatest condottiere the world has ever seen, a man who, at the Battle of Castagnaro in 1387, shows the world that he was a great leader, too.