The Lines of Torres Vedras 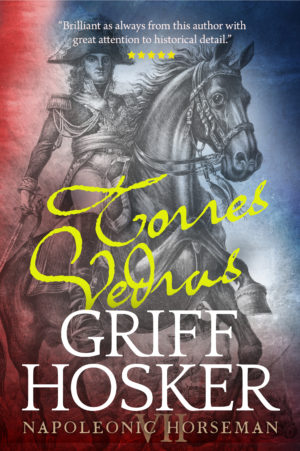 With the rest of Europe subservient to Emperor Napoleon, he sends his best Marshals to Portugal to rid himself of the annoyance that is Sir Arthur Wellesley. Thanks to an uncooperative parliament, the Viscount has little chance of defeating the French with their superior numbers and so he constructs a devilishly complicated series of defences north of Lisbon.

While they are being built Major Matthews and his sergeant have to travel behind enemy lines to discover the size of the problem. There Major Matthews’ past comes back to haunt him and he risks all to gather the information which General Wellesley needs.

As Viscount Wellesley and his resilient army try to fend off the tentacles of the French army they have to fight battles in the most uncompromising of landscapes. The Light Division’s defence of the Côa, the Battle of Bussaco and the bloody Battle of Fuentes de Oñoro are just three of the actions in which Major Matthews and Sergeant Sharp fight for Sir Arthur Wellesley!