Man at Arms: The Battle of Poitiers 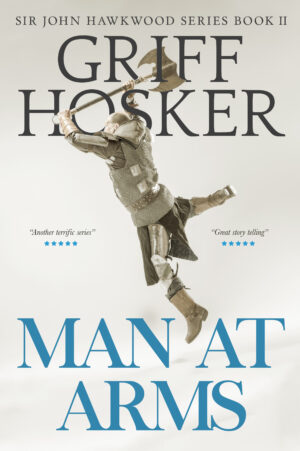 The Black Death! England has won the war with France but the disease which rampages through the land takes both rich and poor, warrior and worker.
John Hawkwood and his two companions spend the winter in the north. It is in the spring that he begins to mould his company into a fighting force, and he serves the Baron Mortimer on the Welsh Border. There his men learn to fight as one and John Hawkwood begins the change from archer to man at arms. When the King and the Black Prince commission him to fight for them, first in an action against the Castilian pirates and then on a chevauchée through Gascony, he learns the skill of leadership.
The novel culminates in Prince Edward’s great raid towards the Loire and the battle of Poitiers where the fate of Gascony and France will be decided.