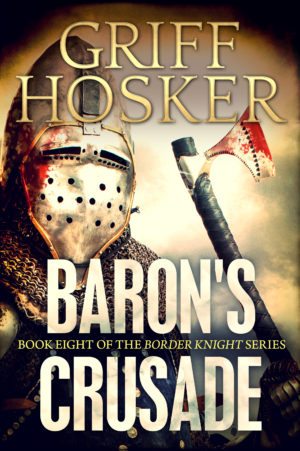 Sir Thomas, Hero of Arsuf, rides to war again! When a king asks a baron to go on crusade it is an order, not a request and, as such, is not to be ignored. The Earl of Cleveland has done his duty for his King and for the Pope many times over but he and his son, William, are chosen as a token gesture to placate an unhappy Pope. Leaving England with a handful of men and untried and young knights, the old campaigner travels across Europe to join a crusade which is going nowhere. In a land riven with conspiracies and plots on both sides, Sir Thomas is beset by enemies. When he is forced, by circumstances, to go to the aid of a beleaguered force of crusaders his past meets his present and threatens his future.
This is the latest book, number 8, in the Border Knight series.